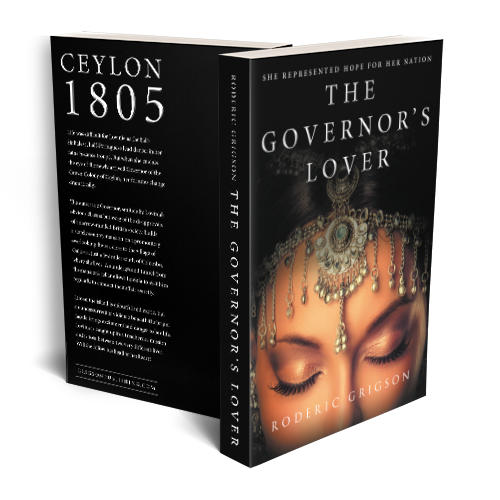 Let me share the story of how this book came about. Ever since my childhood days in Colombo, I was fascinated by the story of Major-General Sir Thomas Maitland, the British Army General who had fallen in love with a local woman named Lovinia Aponsuwa. She was the half-Sinhalese, half-Portuguese lead dancer of her father’s dance troupe that performed at a welcome party when he arrived in the Crown Colony of Ceylon to take up his post as Governor-General in 1805.

The Governor General, smitten by her obvious charms but wary of the disapprovals of a narrow-minded British society, built a stately country mansion on a promontory overlooking the sea close to the village of Galkissa, just a few miles south of Colombo, where she lived. An underground tunnel from the mansion’s cellar allowed Lovinia to visit him regularly to conduct their affair in secret.

For many years I went to a school not far from the Mount Lavinia Hotel, a heritage establishment over 200 years old and one of the oldest in Asia. I often walked past the hotel’s elegant colonial façade, which includes the original mansion the Governor General built to be close to his lover. Later, when I was older and confident enough to enter the imposing building, I was shown the entrance to the tunnel Lovinia used, which exists to this day.

None of their love affair, which lasted over six years, was recorded in detail. All that is known is that the Governor General was eventually recalled to England in 1811 after suffering two severe bouts of malaria. He went on to play an important role as a Governor General in the Mediterranean until he died of a stroke in his 60s, still very much a bachelor.

What became of Lovinia has been lost in the mists of time. Some stories say she died of a broken heart after her aristocratic lover left. Others say she became a wealthy landowner in Attidiya, close to her village of Galkissa, the land bequeathed to her by the departing Governor General.

Although I have tried to stay true to the historical facts of the time—Governor Maitland was sent to the island to arrest the crippling expenditure that previous Governors had incurred administering the Crown colony; the British East India Company held a monopoly on all the island’s cinnamon concessions; the repatriation of the Dutch VOC prisoners and their families to Batavia; Governor Maitland clashing with the Chief Justice and forcing judicial reform in the Maritime Provinces; the alarming Sepoy mutiny in India
for which troops were despatched from Ceylon to quell; and the never-ending and costly war against the middle Kingdom of Kandy—the story is a product of my imagination.

However, there are a few exceptions. I have remained true to Governor Maitland’s character traits and actions on the island, as noted by many historians. He has been described as a despot and an Empire Builder who implemented civilian and military reforms on the island, which eventually led Ceylon to be known as the Jewel in the British Crown. I’ve also shown his interest in the local culture, which was quite unusual for a high-ranking European at the time.

And finally, I haven’t concerned myself only with kings, generals, the well-to-do and the ne’er-do-wells. I have tried to show the island’s unique culture and how ordinary people lived, laughed, suffered, and even managed to thrive under the yoke of colonial rule.